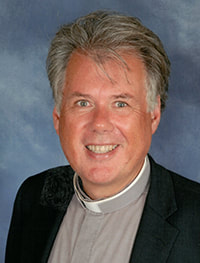 Until Mark arrived in La Jolla at the beginning of 2016, his 25 years of ministry had all been spent in the Diocese of London. He was a curate in Islington and Ealing, and was then Vicar of St Peter’s, Notting Hill, west London. Mark is a third generation priest. His father was the Vicar of Egham in Surrey, which is where he grew up and where the Magna Carta was signed. Mark was educated at Oriel College in Oxford where he took a First in Theology. After a time teaching in a large High School and working as a Youth Worker, he went up to Cambridge to study for ministry at Ridley Hall. During that time he also gained a PhD (on the Authority of the Bible) but, more importantly, met his wife Laura – who hails from Anaheim, California. They were married at Clare College, Cambridge, where Laura was studying. They have two children, Miriam who works as a social worker in London and Jacob, who is a student at Northeastern University in Boston. In recent years Mark returned to student life (part-time) and gained a Masters Degree in Christianity and the Arts from the National Gallery and Kings College. As well as an interest in the Visual Arts, Mark loves sports and collects old postcards.. Email Fr. Mark. 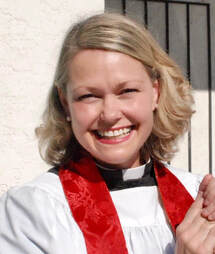 The Rev’d D. Rebecca Dinovo was called to St. James as our Minister for Congregational Life in mid-2016 while serving as the Rector of St. John the Evangelist Episcopal Church in Milwaukie, Oregon.
Previously Rebecca served as a parish priest in Kirkwood, Missouri; El Cajon, California; and Worthington, Ohio. Her parish experience includes expanding outreach ministries related to community need, growing churches through intentional newcomer ministry, developing new liturgies and worship services, and re-visioning the church for wider community involvement.
Rebecca discovered her call to ministry while serving overseas in Chiang Mai, Thailand as a college student. Upon returning to the states she became involved in college chaplaincy while attending Whitworth College, and was called to be a lay chaplain at the University of Michigan where she was eventually ordained in 2003.
Rebecca studied at the Graduate Theological Union where she received her Master of Divinity in 1999 and a Master of Sacred Theology in 2003. She is a Cursillista and the co-founder of the Episcopal Network for Animal Welfare. In her free time she enjoys spending time with her family as well as reading, hiking, singing, film, writing, and making art. She is grateful to be called to serve at St. James-by-the-Sea and to minister alongside the Rector, staff, and people of St. James.   Email Mo. Rebecca or call the church office, extension 105.