Come experience the peace of ​Taizé 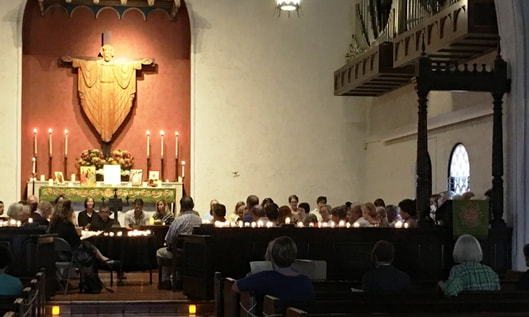 A Taizé (pronounced “teh-ZAY’) service includes music of participation, often sung in short Latin phrases, so the mind is released from distraction, allowing the mind to focus on listening to God.

"Singing is one of the most essential elements of worship. Short songs, repeated again and again, give it a meditative character. Using just a few words they express a basic reality of faith, quickly grasped by the mind. As the words are sung over many times, this reality gradually penetrates the whole being. Meditative singing thus becomes a way of listening to God. It allows everyone to take part in a time of prayer together and to remain together in attentive waiting on God, without having to fix the length of time too exactly. To open the gates of trust in God, nothing can replace the beauty of human voices united in song. This beauty can give us a glimpse of “heaven’s joy on earth,” as Eastern Christians put it. And an inner life begins to blossom within us. These songs also sustain personal prayer. Through them, little by little, our being finds an inner unity in God. They can continue in the silence of our hearts when we are at work, speaking with others or resting. In this way prayer and daily life are united. They allow us to keep on praying even when we are unaware of it, in the silence of our hearts."   (From Clouds & Glory: Prayers for the Church Year, Morehouse Publishing)

The Origin of Taizé Worship

Taizé is a village in the Burgundy region of France. Roger Schütz, son of a Swiss Protestant minister, was only 25 years old when he came to Taizé from Switzerland in 1940. In the war-torn years that followed, he began sheltering Jewish refugees and praying in the village church. Others joined him and soon a small community of brothers was formed. Believing there would always be war in Europe until Christians stopped killing Christians, Roger and his followers committed themselves to a ministry of reconciliation, a challenging and difficult task in postwar France and Germany.
​
Slowly, one by one, brothers began making life-long commitments to communal life. Donning white robes, adopting a Benedictine style of daily life and receiving brothers from many countries, Taizé has become a monastic model of ecumenism. Over the years that followed, young people from all over Europe made their way to Taizé to open themselves to this communion which gives meaning to their lives. Today, from March to November, as many as six thousand young people a week come to Taizé for the weekly meetings with the brothers. Focusing on three periods of communal prayer each day, participants delve into the meaning of their own spiritual journey, explore their faith commitments and worship with people from all over the world.